All about Thai longtail mud motors. Best boat width, engine size, and shaft length. Let’s get into it!

There are a couple of Thai longtail mud motor brands.

I reviewed the majority of them here – https://www.jtgatoring.com/comparing-best-long-tail-mud-motor-kits-2018/

There are many things that go into setting up a rig whether it’s for Duck Hunting, Fishing, Alligator Hunting, etc…

The main things are your boat size, engine size, and shaft size. That’s what we’ll cover in this article.

Jon boat sizes can go from a 10 ft boat all the way up to 20 or 24 ft. Jon boats also have different widths to worry about too.

BUT in this article, a jon boat will be considered any aluminum boat that is riveted and easily accessible for purchase.

Boat size is a whole discussion of its own that will be covered later. For now, a single person can comfortably manage all jon boat sizes, two people would be best off in a 1436 or bigger, and then three people or more I would not recommend but could be done on a 1542.

So after you pick your boat, we’ll move onto engine size.

After choosing your boat size, take a ganger at that yellow sticker near the rear of the boat by the transom.

There will be a recommended HP (Horse-Power) rating for that boat. This is the maximum size engine that could be put on the boat safely.

This is also used to protect the integrity of the hull. If you put too much weight on the transom, it could buckle and fail.

FYI – I put a 13hp longtail on my 1436 jon boat rated for a 15hp engine and it weakened the transom. I contacted Alumicraft about it and they said they would not warranty it because I voided my warranty by installing a mud motor on it. So… keep that in mind whether you go with a different brand or report your issue differently.

So, engine size. In short: I would go with a Predator Engine from Harbor Freight. They are the most affordable and the easiest accessible engine there is for single cylinder engines.

Once you get into V-Twin engines, then you can do the 22hp Predator Engine or spend a little more money and get a Vanguard Briggs Engine which is some of the best engines out right now and doesn’t break the bank.

Let’s keep it simple for shaft lengths when it comes to Thai longtails.

Use the shaft length that comes with the kit. Simple.

Some kits give you an option, like the Swamp Runner kits. The option is normally an 85″ shaft or a 100″ shaft. So let’s go over the differences;

So… If you plan on going fast for long periods of time, the 100″ shaft will give you move reach and tail weight which will help keep the prop in the water and will be easier to control.

If you are going to be at idle speed or off plane for long durations, then the 85″ will be easier to handle and maneuver. 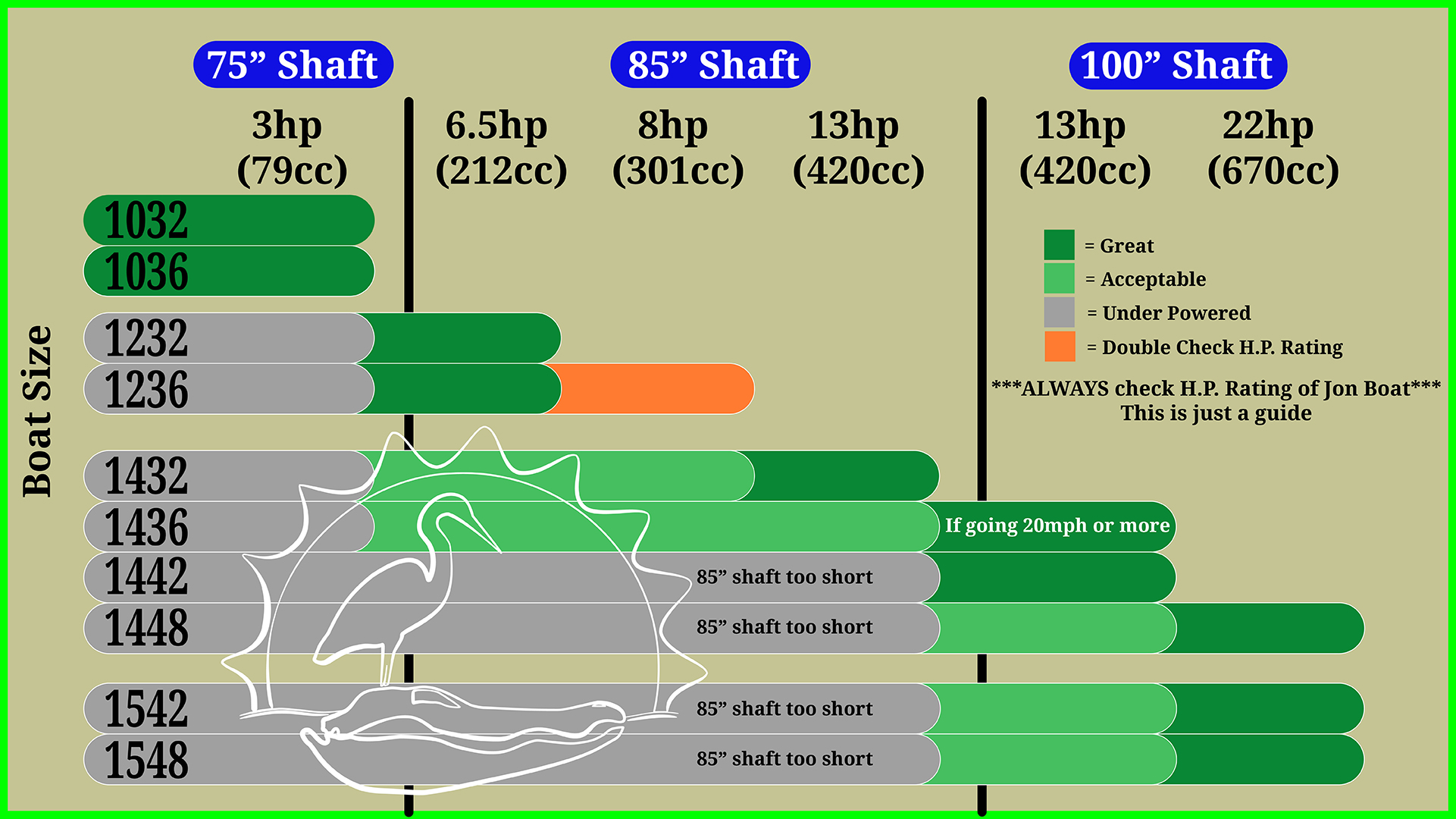 This setup is super lightweight, and something I can move by myself. On dry land it is tough, but on grass, muddy water slurry, pushing over sand bars, I can do it by myself. The Wetlander Slick Bottom Coating really helps out too. You could also add a winch onto this and guarantee you never get stuck again.

The 6.5hp engine doesn’t have the torque to push you through grass or mud and the 22hp is just too heavy.

The 1236 jon boat has the same footprint of a 1436 jon boat so it doesn’t hurt to get that extra two feet which seems to make a huge difference when two people are in the boat.

A 1542 gets wider and longer and the footprint changes in the water where you need the 22hp to push it so it gets too big and heavy for a single person to handle if you get stuck.

Thai longtails are great mud motors, but you need to know your options and what you are going to use them for.

There are PLENTY of people out there with these rigs. Find someone who has a similar rig you want and ask them if it does what you need it to do. If it does, build out your rig and skip over all the issues they already figured out for you.

A great place for this is the Longtail Facebook Group – https://www.facebook.com/groups/longtailmudmotors/. Over 2,000 people with longtail experience.

Other than that, I hope your enjoy your Thai longtail mud motor and that you are able to decide on the proper size jon boat, engine size, and shaft length for your setup.

Untill next time, this is JTgatoring